University of Athens faces ‘most serious crisis in its history’ and suspends operations because of cuts, while others follow suit 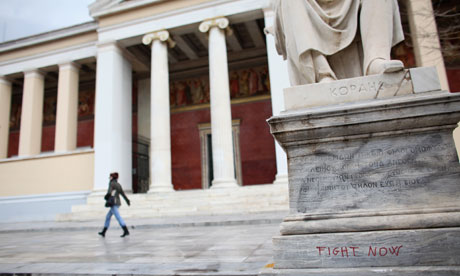 The University of Athens announced it could no longer function because of enforced staff cuts. Other Greek universities are also struggling to function. Photograph: Oli Scarff/Getty Images

Internationally mandated austerity measures have pushed universities inGreece to the point of collapse with many of the debt-stricken country’s pre-eminent higher education institutions being forced to suspend operations.

After the University of Athens announced it could no longer function because of lay-offs demanded by the European Union, International Monetary Fund and European Central Bank, universities in Thessaloniki, Patras, Ioannina and Crete have followed suit. All say that cuts in administrative staff, including guards and archivists, have made it impossible to keep their doors open. Greece is under pressure to streamline its bloated public sector by relocating 25,000 civil servants into a strategic reserve or mobility scheme on reduced pay by the end of the year. Those who cannot find jobs in other government departments will be culled.

In a letter to the prime minister, Antonis Samaras, the president of the Federation of University Teachers, Stathis Efstathopoulos, wrote: “With great angst we have ascertained that with the government’s decision to place specialist and much valued administrative staff into the mobility scheme our universities are at risk of collapse. Even if we accept that we have a surplus of personnel we cannot, from one day to the next, operate with 40% less staff.”

Until now government posts had been guaranteed by the Greek constitution. But almost four years into its worst financial crisis in modern times, Athens’ troika of creditors has ridden roughshod over that taboo, saying deficit-reducing targets demanded employees be dismissed.

Among the 12,500 civil servants already identified for transfer into the scheme are administrative staff at universities working in libraries, laboratories, clinics and professorial offices. Announcing suspension of operations on Tuesday, the rector of the University of Athens, the country’s oldest higher education institution, said it was impossible for the university to operate without the 498 employees who have been stripped from its ranks.

“In order to function, the University of Athens has to be supported with the staff to run eight libraries, 174 laboratories, 66 university clinics established at the biggest hospitals in Attica and 18 museums,” he wrote in a letter to Samaras. “In light of the announcement regarding the removal of such a large number … Athens University faces the biggest and most serious crisis in its history.”

As a result it would neither be able to register students, already gathered for the start of the new academic year, conduct postgraduate courses or release exam scores. “It is very likely we will lose the next six months … but the bigger issue is we don’t lose the university altogether,” he said.

Barely days after the start of a fresh round of negotiations with creditors, the closures have once again put Samaras’s fragile coalition on the defensive. The mass-selling Ta Nea newspaper describes the closures as a huge challenge, not only for students but their families at a time of intense political, economic and social upheaval.

Universities, like most public bodies, had become a breeding ground of public sector profligacy used widely by politicians as a source of patronage in return for votes. Tellingly, only 295 of the 7,680 administrative staff employed in tertiary education since 1994 had been appointed on the basis of a meritocratic process, according to Ta Nea. “In one historic case a lifeguard was paid for years by Athens University of Economics and Business despite the pool in the student housing complex to which he had once been appointed having closed,” the newspaper reported.

Although the need to pare down the public sector is now universally accepted, the crude fiscal logic applied to many of the cuts has been increasingly criticised, with many arguing that instead of reinvigorating the state administration the cost-cutting is weakening it to a terminal degree.

In the case of Greece’s universities many researchers are believed to have been recruited as administrative staff because of funding cuts. “What we are seeing is a randomised set of cuts and job losses without any kind of focus … or meaningful review of how the state administration operates,” said professor Kevin Featherstone, who heads the London School of Economics Hellenic Observatory. “The troika is not focusing enough on structural reforms which would be growth enhancing.”