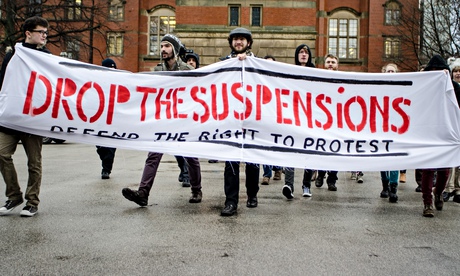 Noam Chomsky and Ken Loach are among a host of academics, artists and politicians to condemn the suspension of five university studentswho took part in a protest on their campus.

In an open letter, signed by 40 people and published by the Guardian, they criticised the University of Birmingham‘s actions as being “at odds with freedom of speech“. They demanded the immediate reinstatement of the students, who were among 13 arrested during the demonstration at the university last month.

“We believe that the suspensions seen at the University of Birmingham are further evidence of the contempt for freedom of expression, both political and academic, in the contemporary university,” they wrote.

The signatories, also include former secretary of state for international development and Birmingham MP Clare Short, who said: “These suspensions are at odds with freedom of speech and the right to protest, setting a threatening precedent for how dissent is dealt with on campuses across the country.

“We condemn these suspensions in the strongest terms and call for the immediate reinstatement of the students affected.”

Their intervention comes amid growing tensions between student activists and the management in some universities, who have clashed over what the protesters called the “marketisation of education”. The protesters want to see an end to cuts and privatisations of university services, and a return to free access to education.

The Defend Education Birmingham activists who occupied part of Birmingham University’s campus said they were part of a peaceful protest and were unlawfully kettled by police, who demanded their personal details in exchange for release. But the university argued that their protest was not peaceful and caused damage to property. West Midlands police have also insisted that the protesters were detained as part of a criminal investigation, not kettled.

Deborah Hermann, 21, who studies European politics, society and economics was one of the students suspended, along with Simon Furse, 22, Kelly Rogers, 21, Emily Farmer, 20 and Pat Grady, 21. She said the university’s stance “shows the wider picture; the repression of the protest shows why the protest is so important”.

She added: “It is unjust, I have been treated very unfairly. I know the university doesn’t care about me, they just want to intimidate students. They always put out statements saying that they really support peaceful and legitimate action, but they don’t in practice.

“They try to stop any kind of protest. Anything we do, they call it illegitimate. Instead, they have just repressed us. In 1968, students occupied the same Great Hall as us. It was emotional, but incredibly frustrating to be there doing the same. Then the police came. It is clear the university doesn’t care about our opinions whatsoever.”

Edd Bauer, a campaigner with the National Campaign Against Fees and Cuts, said: “The reason we see oppression is because [the university management’s] ideological positions are weakly supported. They have no choice but to resort to the stick. It is their only answer because they have no political argument.

He said that the student movement he is part of is protesting against “more corporate universities”.

In 2012, the University of Birmingham was criticised by human rights groups – including Amnesty International – over an injunction it sought to pre-emptively ban protests. Its actions were described as “criminalising” sit-in protests and were called aggressive and censorious by Amnesty, Liberty and Index on Censorship.

A University of Birmingham spokesman said the institution respects the right to protest peacefully and within the law and said that students have a “variety of ways” of making their concerns known.

The spokesman said: “Whilst peaceful protest is part of university life, the university will not tolerate behaviour that causes harm to individuals, damage to property or significant disruption to our university community.”